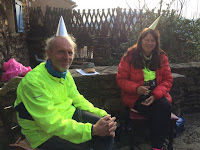 You are invited to Agde Sunday 12/4 (during the easter weekend). A lot of Stockholm hashers will be visiting to celebrate Hornytails birthday!
The run will start at 14:00 from our house. A short walk from the train station.There will be both runners and walkers trails.Lots of drinks, and food after the run. Oysters, of course :-)
Hash cash 10€
Dancing on our roof terrace if you stay late.
If you stay overnight there are a few hotels in town (Yseria and Araur) and many private rooms to rent.Then we can take a hangover walk to the beach for a drink before you head home again.


So how many hashers out there can say they got to run Run #1 of a hash? Well in this case, about 6. Plus 6 Virgins… not a bad Hare/Harriette: Virgin ratio for a brand-spankin’ new hash (did someone say spankin’?!). Although it seemed like a thinly disguised attempt for I Like Your Boobs and Hidden Asset just to trademark a nice set of, well, boobs, no really, those are mountains!, these two fine and experienced hares had, in earnest, invited the entire village and plied them significantly with alcohol the night before, in anticipation of the biggest and best hash of the year. Behold New Year’s Eve, 31 December 2019, which started so gracefully with a hike in the hills, and some geocaching…

Later, the party was in full swing, and our fearless hosts served up foie gras and red beans and rice and some addictive zesty corn dip for a crowd. And lots of champagne. What started like this…and this… 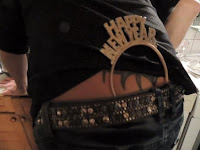 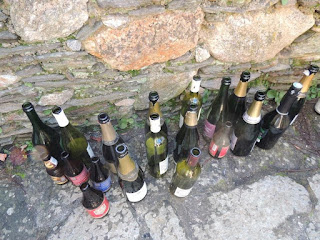 Fast forward a few hours to the morning. Fueled up on smoothies and egg croissant sandwiches with a healthy dose of mayonnaise and cheese dip thrown on top, and above all, strong coffee with Kahlua (Ed note: you can’t make this stuff up), the hares set out to rally the troops in the main square of the village.
Everybody was still drunk from New Year’s, of course. Especially these two.

We roused a glorious 12 people, including the hares of course, and SIX Virgins, for a thorough introductory chalk talk (Village people: why are these nice people drawing pictures on the sidewalk and throwing flour around?) Then a warm-up chicken song. 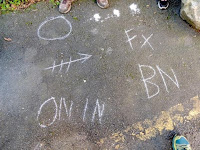 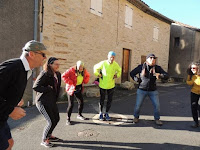 Then smile for the camera… proof that it happened. 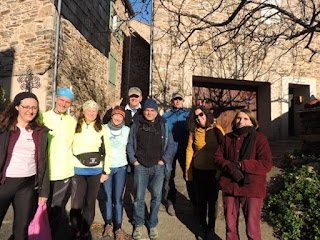 And then we were off in two different directions, runners one way, walkers another way, but really it was all the same stuff, just a nice meander out of the village. Except that John Cleese was the immediate front-running you know what, tearing out of the blocks like a marathon runner, which kept Boobs on his toes. Sort of. 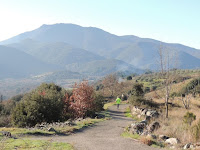 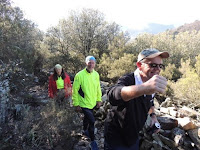 Mostly Boobs just stood around watching and with a beer in his hand, and occasionally hiding in the woods and snorting like a wild boar. He didn’t scare anyone… ok except maybe Levrette. We ran all over the place except where we could actually find any flour. Eventually we made our way to the top of one of the hills for a nice look-out point, and then after that, it was back down to a flat clearing for some sun and champagne. This was the hangover helper hash after all. 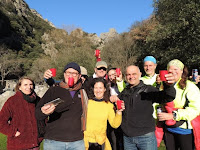 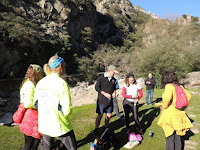 Then we stopped at Just Cecile and JustGary’s for yet another photo-op. 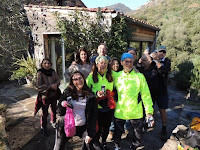 (Ed note: Looks like these runners and walkers did very little running and walking.) Here they are walking – finally! 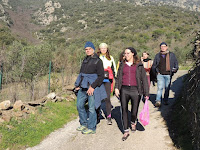 Finally, we were back to the house for some leftover canapes and empty champagne bottles to enjoy (WTF?! Bring on the booze!). Thereafter proceeded the longest hash circle in Saint Martin de l'Arçon’s history.

There were some offenses noted on trail, the worst of which was something that John Cleese did that no one could remember, but it definitely involved some stiff drinking.

(And again, at this point, the Villagers shook their heads and said to themselves, people do this for fun?)
There was a point at which Boobs’ pants magically fell off, but everyone was either so unimpressed with they saw or just so used to it that no one reacted, not even his girlfriend. And certainly no one bothered to take a photo. And later, some S&M with the always innocent Levrette strapped to a chair with some duct tape and a bit of parsley shoved up the nose (why?)… to which No Nuts interjected: Hey, that stuff’s expensive! (The duct tape, not the parsley). Again, no photographic proof.
And so ended the most amazing day of the year (so far).

ON ON to the next one!

A few pix from glorious run#1 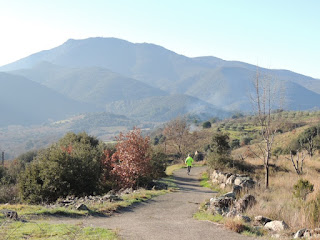 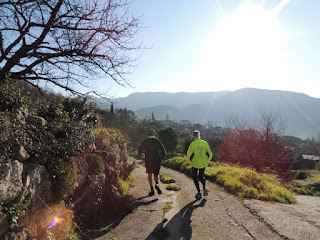 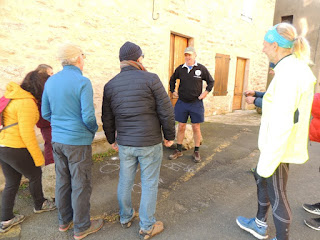 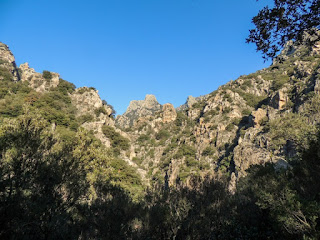 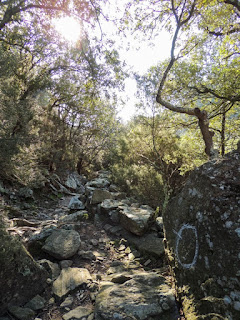 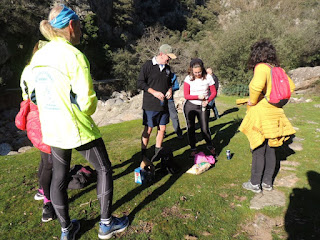 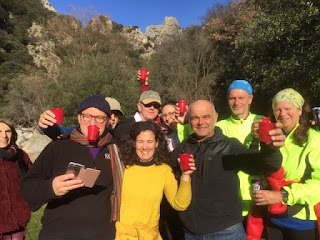 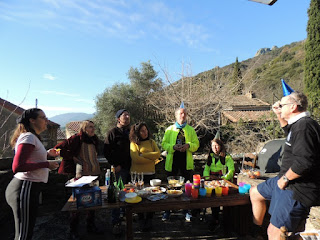 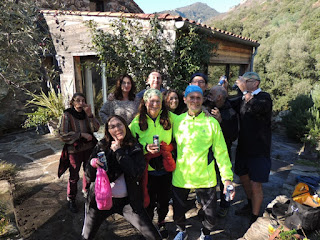 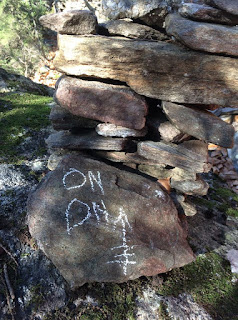 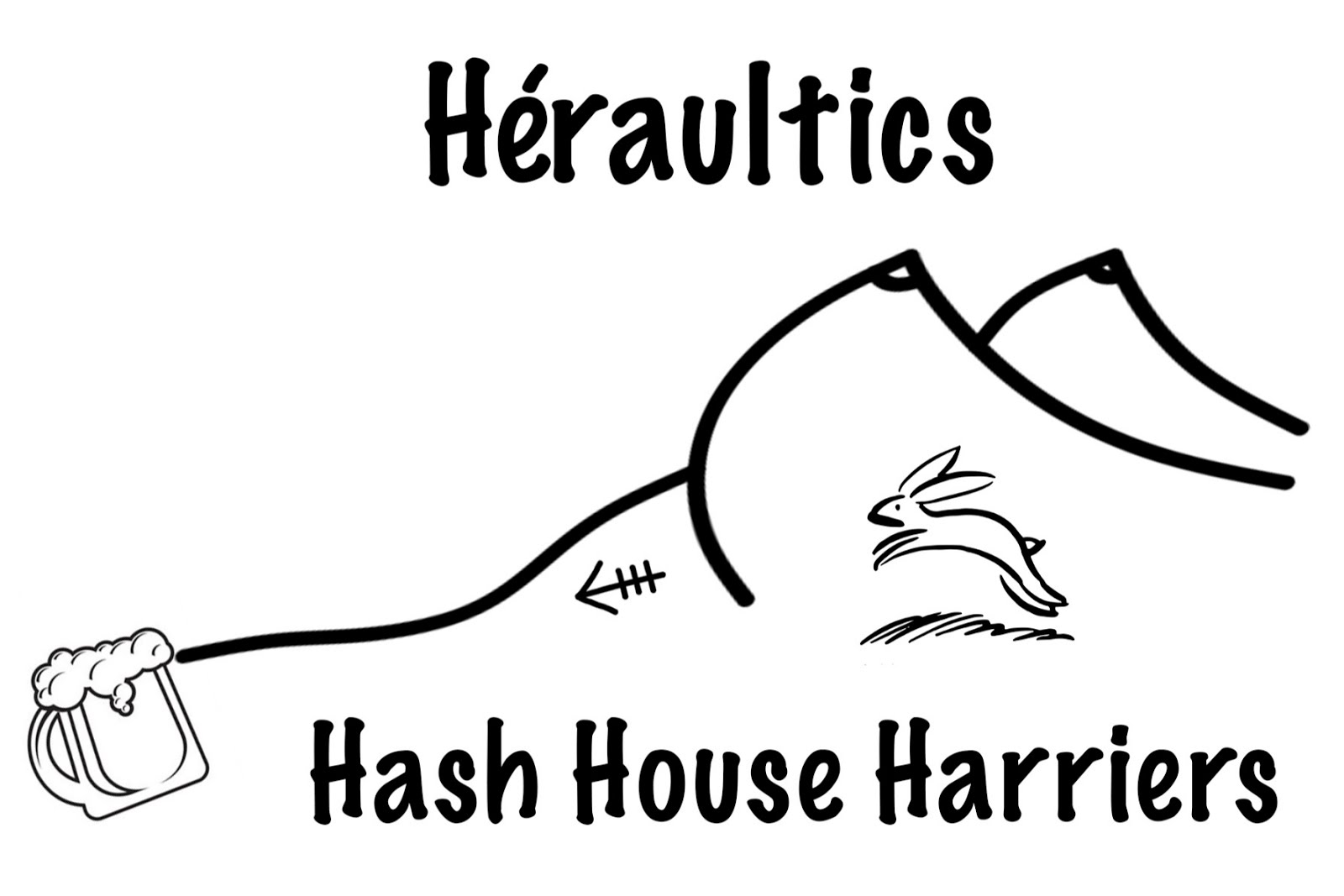